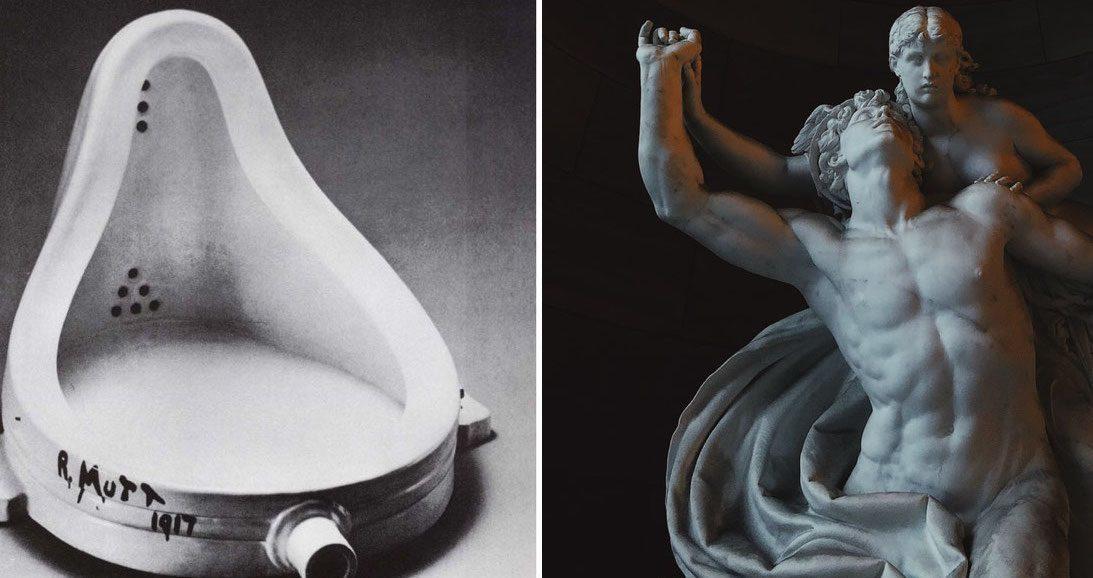 Art Has Always Been A Tool: The Cult of Ugliness, Our Youth & Art Basel 2019

Art teachers are facing skyrocketing unemployment rates across the nation. A flock of affluent art enthusiasts are doing their annual migration down to Art Basel. Urinals, toilets, garbage, black dots, blank canvases are art? Where has beauty gone? Grit Daily Live! is bringing journalistic rigor to Miami Art Week this year and asking the important questions.

The Grit Daily Live! team is saying goodbye to the Tri-state area (momentarily) and hello to Miami for Miami Art Summit December 6 and 7 during Miami Art Week.

Preparing for the event has been stimulating if nothing else. Interacting with creative minds on a daily basis inevitably gives rise to a sense a liveliness within a person. Beyond exciting though, and I must admit to my surprise, it has been thought-provoking. All of this fun going on as unemployment rates for our art teachers are skyrocketing across the nation. Simultaneously, a largely affluent group is preparing to disembark on an annual artistic voyage.

The situations sent me down a rabbit hole of questions eventually leading me to one conclusion. Collectively, we have either forgotten about or are ignorant of the essential role art played in our evolutionary history. From the caves to the onset of early religious rituals, art was an instrument to overcome our physical limitations. It’s origins begin with our ancestors mapping out landscapes on cave walls to better prepare for hunts and tribal battles. Soon thereafter we further externalized ourselves through art as it became a vehicle for transportation into a believed metaphysical world. Examining a black dot on a blank canvas would be quite confusing if not outright laughable to our cave-dwelling forebearers.

I wondered if our early friends would awe at the Sistine Chapel or the Kaaba as we do. I figured they would, that they wouldn’t have a choice in the matter. My argument is not that we should see art like cavemen! Rather, it is that as a collective we are ignoring the naturalness and utility intrinsic within art. Moreover, I fear taking art away from our youth will have severe negative consequences. This is why the cult of ugliness has to go.

Ernst Beyeler, the founder of Art Basel, had a net worth of roughly $1 billion before dying in 2008.

Namely in the visual arts, the biological story of art as a tool is looked down upon entirely. Attempting to explain the function of art is heresy and anyone attempting to do so is deemed intellectually void. This stems from philosophical and artistic movements arising in the early 20th century, but we will get into that later.

This narrative is propagated by art galleries, so-called “art experts,” or appraisers, who put a price tag on art. Those who hire such “experts” are overwhelming highly affluent and spend 10’s of millions of dollars on sometimes literal garbage. Funny enough, the art of developing a skill is not important in contemporary and modern art. Hence why a urinal with a signature on it is considered the most influential piece of the 20th century. This is the “cult of ugliness” and I believe it is funded by two groups. Wealthy intellectual cynics and other rich folks who accept a toilet as art because the others do. These factions are the gatekeepers of popular art in today’s world.

This movement, I believe, is intimately intertwined with that rapidly increasing unemployment rate of art teachers. It is impossible to make a case for giving our youth art class without being able to define it.

Would you buy an undefined item off of Amazon for 59.9 billion dollars? (Dept. of Education, 2019 Appropriations)

Since the onset of Dadaism in the early 20th-century though, artists did away with beauty and focused on shock value. It’s no wonder why this transformation occurred, the philosophical movement of Absurdism arose alongside it for clear reasons. After World War I the world became an altogether different and very confusing place. Trench and machine warfare injected a newfound cynicism and ugliness into society. Art was one of the vehicles it manifested itself through. It’s not surprising that after World War II anything could be considered art. People, artists, we’re giving the finger to an unjust and increasingly very clearly godless world. This movement lives on to this day.

This begs the question, if art no longer requires developing a skill why should my tax dollars go to it?

Global Peace & The Re-Beautification of Art

The flaws in that argument are hopefully self-evident. It is clear to most people, whatever your definition, that art is worth something in and of itself. Nevertheless, the argument still holds for politicians and government bureaucrats deciding to place tax dollars in art or coding classes.

Steven Pinker is a renowned linguist and public intellectual. In his new book, Enlightenment Now, via a plethora of data he tells the reader why they should be grateful. Statistically, we are living in the most peaceful, prosperous, safe, clean, etc. time in all of human history. To us, sadly that may be a throwaway line but the historical significance of it is unparalleled. We are nothing short of blessed.

Aside from the 24-hour news cycle, the real problems we have to solve, and people’s personal biases – Dr. Pinker’s facts should be reason enough to once again infuse beauty into art. Stated differently, after the darkness of both world wars, when it seemed like humanity was doomed, a great light emerged. Races and ethnic groups that had been warring for centuries if not millennia united into a global coalition and put aside their differences to make a better world. No one ever pressed that button during the Cold War either.

These are reasons for a renewed idealism, an updated picture of mankind and newfound hope. Technology is not the evil we thought it was, human nature isn’t either. Art was understandably ugly during the ugliest period in our history. Now, during our brightest time, it is time we infused beauty back into art.

A Renewed Idealism & The Case For Art Classes

The cynically laden art that persists today should be replaced if art is any representation of our time. We can once again utilize art as it was initially intended to be used – a tool to momentarily transcend yourself. With technology that feeling of walking into Sistine chapel – with all due respect to urinals of course – can be brought to each person’s fingertips. Then we can go to our congressman and explain why the arts play an essential role in society. It enhances creativity, relieves stress, increases productivity and inspires rather than shocks.

Why did Juul take off so quickly and leave their competitors in the dust?

Steve Jobs understood one basic principle: Humans will always be drawn to the beautiful, sleek, and simple. He used that simple idea to create what is now the 6th largest company in the world. Steve Jobs understood the power of beauty and it’s existence in all of us. If this one principle allowed Apple to become what it is, art still plays a central role because – beauty sells. An incentive then necessarily arises to put it art back in our classrooms.

Art has always reflected it’s historical time period but I fear that this cult of ugliness is holding us back. Our young men and women are not in the trenches or liberating inmates of concentration camps. The goodness within human nature, for now, has prevailed and art should reflect the beauty at this moment in time.

Do you disagree with this entire article? Come join us at Miami Art Summit co-hosted by JADA December 6-7 in Miami, Florida, and explain why! Grit Daily Live! events are always forums for awesome, open, and robust debates — and a top opportunity for artists and gallery owners to meet the press.

Chris Panagakis is a former Managing Editor at Grit Daily Live! Based in New York, he is former staff at The Wall Street Journal.