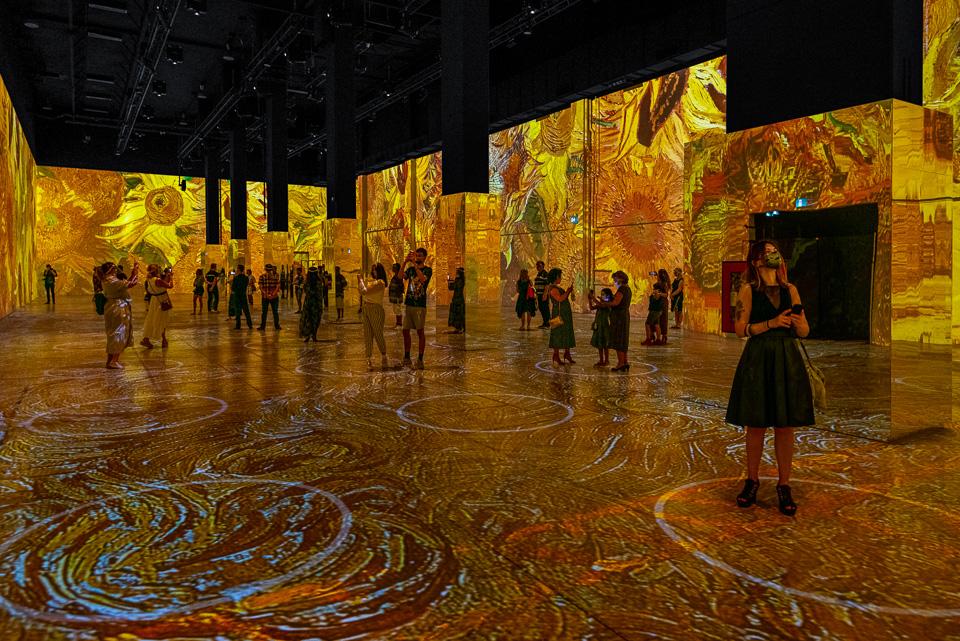 Drive-in movie theaters are enjoying a major resurgence during the COVID era.  But the drive-in concept has also taken root in less traditional venues.  One of the more ingenious drive-in leisure experiences emerging during the pandemic is the Immersive Van Gogh exhibit in Toronto, which includes an aptly named drive-in version called GOGH by car and a “walk-in version.”

The exhibit, which opened in July and is located in the former Toronto Star building, was produced by Lighthouse Immersive and created by Massimilliano Siccardi and Luca Longobardi, the design team behind the highly successful Van Gogh exhibit at the Atelier des Lumieres in Paris.

It uses 3D projection mapping on walls and floors as well as music to illuminate Van Gogh’s greatest work, including Starry Night, Sunflowers, and  Bedroom at Arles.

But, as Corey Ross, one of the show’s producers, points out, the Toronto exhibit is “a completely new approach to Van Gogh’s works,” as it’s “more emotional and psychological.”  Sean Richards,  the exhibit’s production manager, adds that the exhibit is an abstract, non-narrative way of looking at art.”

As Ross puts it, the exhibit focuses on the “last moments of Van Gogh’s life.”   The drive-in experience has “been a great attraction for the demographic that’s uncomfortable walking in public, even when safety procedures are well implemented,” observes Richards.

To insure that drive-in patrons are afforded the full audio experience, “music is delivered to them through FM radio channels,” he reports.

In an effort to insure even greater social distancing, two separate galleries have been arranged to allow both patrons in cars and on foot to enjoy the exhibit safely.  Patrons in cars as well as those on foot have a chance to view the exhibit for a 35-minute period.

Securing adequate space and projectors for the exhibit were key challenges for the producers.  As Richards explains, the Toronto Star building was the only building that could accommodate 53 projectors.  Furthermore, the producers devoted a long time to “construction and renovation” in order to prepare the space for the Immersive Van Gogh exhibit in Toronto, he noted.

For example, they “built 5 story high walls.”  They also needed to “project the designers’ work in a way that would satisfy them,” even though Siccardi and Longobardi couldn’t be physically present due to the pandemic.

Innovative drive-in art experiences at other locations have also offered new perspectives on art and met audience safety needs during the pandemic.

Published in Art and Life