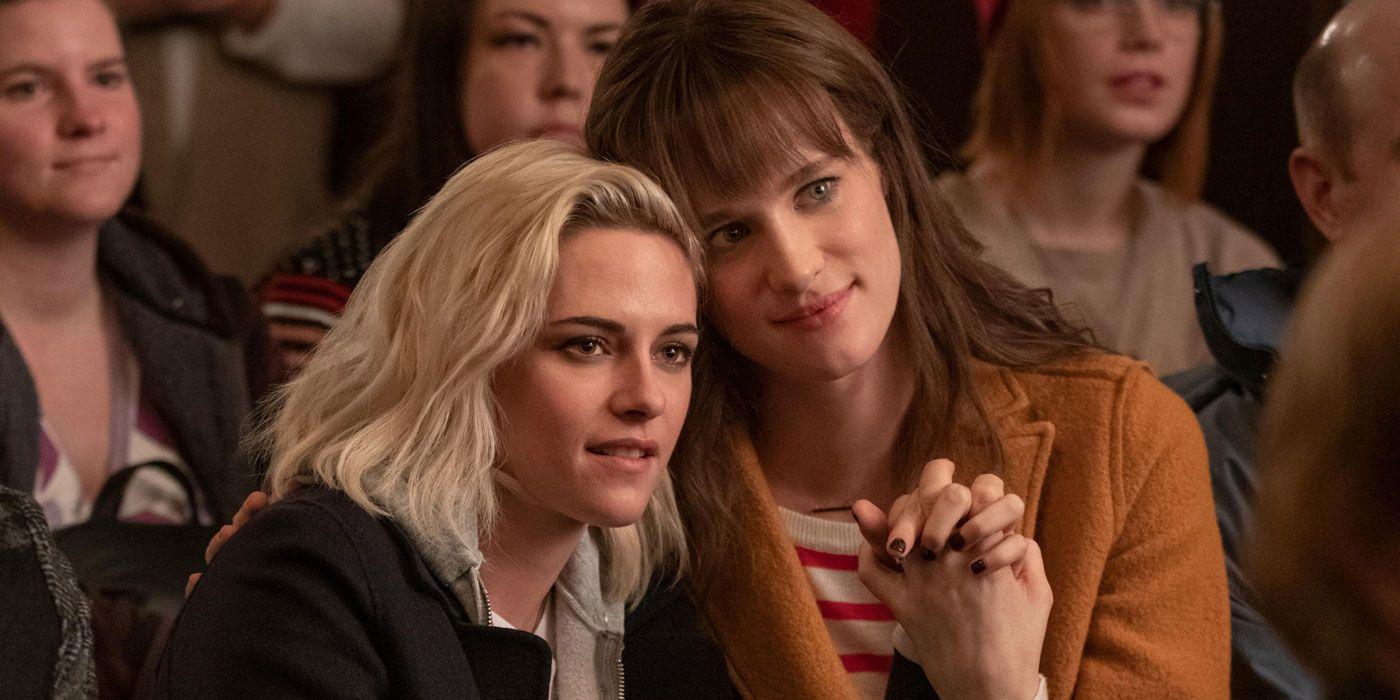 Happiest Season could one day be a holiday classic. It’s that effective. Clea DuVall’s holiday movie works as both a broad Christmas comedy and a character-driven drama. It is familiar, but also new since it’s a Christmas tale told from the perspective of two gay women. As much entertainment value as Happiest Season provides, it also offers up a rare moment of genuine inclusion front and center in a holiday film.

Abby (Kristen Stewart) is excited to spend Christmas with her girlfriend, Harper (Mackenzie Davis). She’s so excited she’s planning to propose. On the road to Harper’s home, however, it’s revealed she hasn’t come out to her very uptight and very annoying family. The parents, played by the great Victor Garber and Mary Steenburgen, treat their kids like they’re living in a dollhouse. No one is comfortable in the house, not even the ultra-happy-go-lucky sister played by Mary Holland, who scores the biggest laughs in the movie. It’s a stacked supporting cast with the likes of Dan Levy and Aubrey Plaza, with the latter giving such a nice and laidback performance.

When Happiest Season is at its most laid back, that’s when it’s at its best. It’s the quiet moments that leave the greatest impression, like when Abby and Harper or alone or when Abby is getting to know Plaza’s character, who came out to her parents long ago. As a director and actor, DuVall (shoutout to Carnivale!) has such a nice and easy touch with character moments.

She’s a natural filmmaker and writer. DuVall made her directorial debut with The Intervention, a similar ensemble comedy that can naturally blend ridiculousness with humanity. Happiest Season goes a little harder on the comedy and broadness, but in an appealing way. Like great Christmas movies, there is ultimately an earned warmness to the Hulu film that rings genuine. There are moments of authenticity, not only inclusion, we just rarely see in holiday movies.

There’s a lot of Happiest Season we do see in other movies. It mostly goes where audiences expect, but for the most part, the Hulu movie has an identity of its own. It’s a story that doesn’t get told enough, especially in movies with as much commercial appeal as Happiest Season. It is like a lot of studio comedies in tone and hijinks, but it’s also a much-needed change of pace for a holiday film. We just don’t see this perspective enough in movies, especially family movies.

As for the hijinks, it’s pretty good stuff. The laughs aren’t always consistent, but when they land, they can land big. Levy, best known for Schitt’s Creek, DuVall knows exactly when to use to light up a scene and the movie as a whole. On top of that, Levy, unlike a lot of gay men in comedies, isn’t solely comedic relief. He has a very touching scene I won’t spoil.

Happiest Season has a stacked cast that keeps things lively. Timothy Simmons from Veep, for example, shows up for one scene that brings a lot of laughs. It’s a ridiculous moment, but DuVall is very good at making those silly moments gel with the movie’s drama. The laughs are good, and the drama is even better. Happiest Season is an important movie, but it’s also an entertaining movie. Happiest Season is a new Christmas movie to add to your yearly catalog of feel-good holiday films.

Published in Entertainment and Streaming